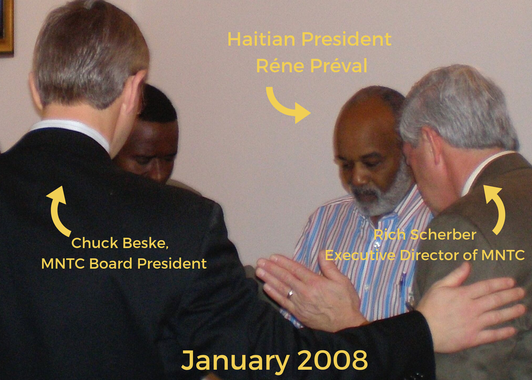 The team met with Haitian President Préval, visited orphanages and prisons, walked the streets of Port-au-Prince, and were spiritually moved by the tremendous poverty and daily struggles experienced by the people.   More specifically, they observed the “fatherlessness,” and lack of positive role models for the young Haitians who have little hope for their future.

​Upon their return home the team presents their report of the trip to the Minnesota Adult and Teen Challenge Board.  The response is, “this is off mission,” “we have concerns of own, this is not a good time,” and “this is not something we want to do.”

But God is stirring in the heart of Pastor Rich Scherber and reminding him of Esther 4:14, “for such a time as this you have been called.”  Hearing those words results in a unified agreement of the board to pursue what God’s plan might be.  The Board Treasurer, Craig Sulentic and now HTC Board Chair, raises his hand to join the task force, because the rest of the verse says, “if you do not obey, you will be destroyed.”

And so begins, the 2-year journey to analyze and discern, and hopefully be able to say no to Haiti.  A team of reluctant warriors completes a SWAT analysis, creates Gates for progress (Gideon Fleeces), gathers on the ground information, and raises prayer after prayer to the heavens.  The call to Haiti doesn’t go way. God opens every gate, provides for every need, and as the task force gathers to pray at its last scheduled meeting a mighty wind blows through a closed room.  God has called us to go.

In 2010, Haiti Teen Challenge was formed as a Minnesota non-profit, religious organization, and tax-exempt 501(c)(3) status was subsequently obtained to establish a Teen Challenge program specifically designed to train and mentor young men to break their addictions, become responsible godly leaders to their families, communities and to transform their country from within.

The HTC Center officially opened in February 2011 with twenty-three young men between the ages of 16 & 24 and in the fall of 2015 a women’s program was added.

So much poverty.  The shanty towns where people made lean-tos with whatever materials they could find. Corrugated tin or cardboard…vendors everywhere selling everything from fruits and vegetables to toiletries to cell phones. All sitting on the sidewalk with their wares.  Candles on the street because of the lack of electricity.  The density of people is overwhelming.
People pack themselves in the brightly painted and decorated "tap taps"  (people "tap" the side of the vehicle to signal they want to get out.) So much garbage everywhere! Looked like YEARS of accumulation!  Dogs and people scrounging through the garbage for food or whatever....
The roads! Potholes and stones/boulders everywhere. Takes a real beating on a car's shocks system and our backs!!!! One funny observation....after a very long bumpy road back there was a short section of pavement, but within a few feet, a set of speed bumps!!! No sense of order to traffic flow. Lots of honking and near misses, and side swipes!
What are we supposed to do with this?"

Now is the time for the people of Haiti to be a witness to the world for the splendor of God.